We’ve now worked a full week at Kalambo Falls, that’s six days in the last ten.  A slow start by choice, and by necessity.

By choice because we made time to pay a call to the chief whose authority includes the falls.  From experience, getting the blessing of a chief improves relations with the local community.  It shows recognition of this traditional power structure.  Calling on the chief also reminds us that we are outsiders and that there are other perceptions of reality, other ways of being human.

Through local contacts we arrange to meet Chief Zombe on Sunday morning.  His palace (home) lies along a rutted dirt track midway between Mbala and the Tanzanian border.  This isn’t a much-used international thoroughfare. The track from Mbala to the Kalambo Falls turn off is graded, but deteriorates rapidly from there onwards.  The vehicle ahead swerves, tipping at an alarming angle.  Slowly, slowly.

We’re late and the chief has left,  but fortunately we pass his vehicle en route.  He turns around and guides us to his palace.  We park to the side of his house.  Unseen hands transfer our gifts of mealie meal (maize flour), sugar, cooking oil and soap from the back of our pick-up to a storeroom.

The women in our group quietly wrap themselves in chitenge cloth, a mark of respect.  No such rules for the males, but we make an effort with our limited means – clean shirts and trousers.

A slight tension hangs in the air.  I’ve met many chiefs over the years and each has treated these occasions with a blend of formality, patience and good humour.  What would this chief be like?

Chief Zombe appears in a loose long shirt, open at the neck, with an amber coloured wood staff in his right hand.  He invites us in, no need to approach on bended knee, offering three claps whilst repeating a set phrase.  A more modern chief, then? Or one in a hurry given we’re late?

We are led into a  dark room made small by our numbers.  A charcoal brazier sits to one side, this is the southern hemisphere’s winter, despite the unusual heat outside.

Following his  welcome and our grateful response, the story telling begins. Chief Zombe explains the disputed history of the discovery of the falls, a story which predates the arrival of Europeans.  We learn the name ‘Kalambo’ means sacrifice, though the modern spelling is a slight corruption of the local Lungu word.

The story continues. Bragging rights are up for grabs for the claim of the first to see the falls.  A man and woman, at loggerheads, daubed with white clay (significance unclear), cause strife for the communities involved.  The spirit of the river – Mbwilo – intervenes. The woman, possessed, throws herself over the falls, a certain death (the falls are the second highest in Africa).  This sacrifice verifies the truth of her claim.  The man falls to the ground shaking in terror.

Chief Zombe holds us in his spell.

The mood lightens as he shares a personal story.  As a young man he was scared by the rites of passage required of a chief in waiting.  If he failed any one of three tests the title would not be his.  First came a test of purity in the form of a deadly herbal potion.  He survived by vomiting – a less pure individual would die at this first hurdle.  Next, his firstborn must be female. This daughter embodies a powerful role, but the tale is already long and there’s no time to elaborate on links to the sacred oracle stone, chisola.   Finally, the second born must be a male, the next heir in the lineage.

We meet his firstborn daughter.  She enters through a curtain after we make a token offering and shakes our hands.  Chief Zombwe says – if I remember correctly – that luck will come our way.  Let’s hope so.  Smiles all round as we file out for a group photo. (Two versions here, so you can see most of us properly!)

Back on-site luck is needed as Mbwilo has placed a large obstacle in our way – the Kalambo river.  It is dropping, but only slowly, just one centimetre a day. At this rate we need to wait 40 days to access the Early Stone Age without a snorkel.

Sandbags at the ready and with 10 metres of black tarp we wade into the river. The plan is to create a small, plastic-lined dam to give added space to excavate below river level.

The green waters of the Kalambo river are clear.  Minnows and tiny crabs visible beneath its surface.  And so is a spit of land extending beyond our dig. If we could extend 30-40 cm below the river level we might just reach the coveted Early Stone Age.  Five of us spend the morning constructing a slippery paddling pool.

The spit turns out to be clay slumped into the river and we each take turns falling face down on its impossibly slippery surface. Great fun at first, but not for long.

Splish, splash! Thanks to Rebecca Sowerby for the picture

The weight of wet sandbags saps our energy. The cold of the river takes its share.

We construct a foundation of sandbags encased in plastic on which sit three courses of bags.  It leaks.  We shift and realign the lot.  It leaks.  Hot sun and cold bodies – a wicked combination that dulls the senses. We plug holes with smaller bags, squeeze excess water from the tarpaulin.  No joy.  The clay surface deforms under the pressure of feet and bags; new gaps open.  Frustration grows. Mbwilo is toying with us, setting obstacles – tests of worthiness.

Cold, tired and temporarily defeated we turn to Plan C – back to dry land with just 20 working days left.  New trenches must be opened and just far enough from the river’s edge to reach the Early Stone Age before the water table intervenes. 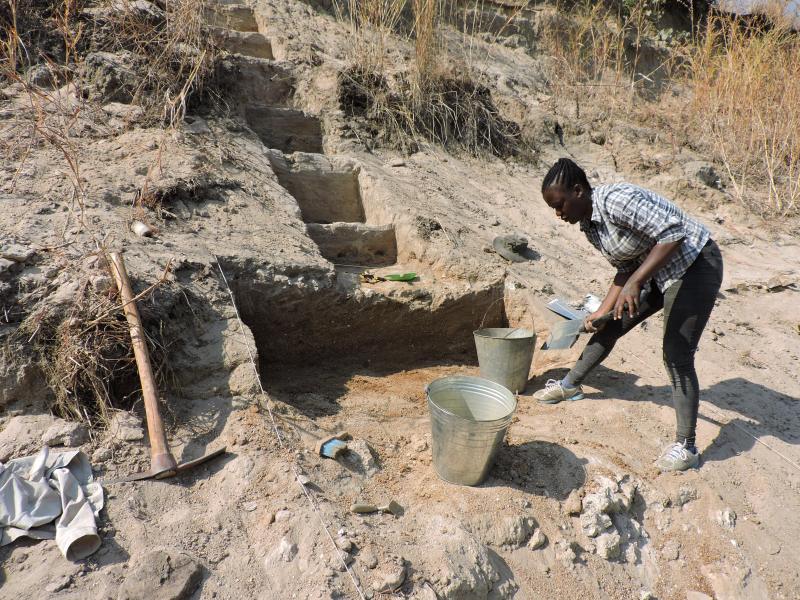 Away from the river, the team has been suffering from the unusual heat and poor sleep from the wild winds that howl each night. Tents shake and doors bang.  Baggy eyes all round at the breakfast table. And it’s taking time to adjust to new foods, the heat, malaria medicines (with associated nightmares) and being far from home without the internet.  Almost every day sees us set off for the site leaving two or more crew behind to recover from various ailments.  Progress slows, yet another obstacle.

Back on site, in the middle of a hectic afternoon an elegant elderly man dressed in a blue and white striped shirt topped with blue hat appears at the cliff top.  He stands head and shoulders above the ever-present audience of small boys (it’s always boys for some reason). 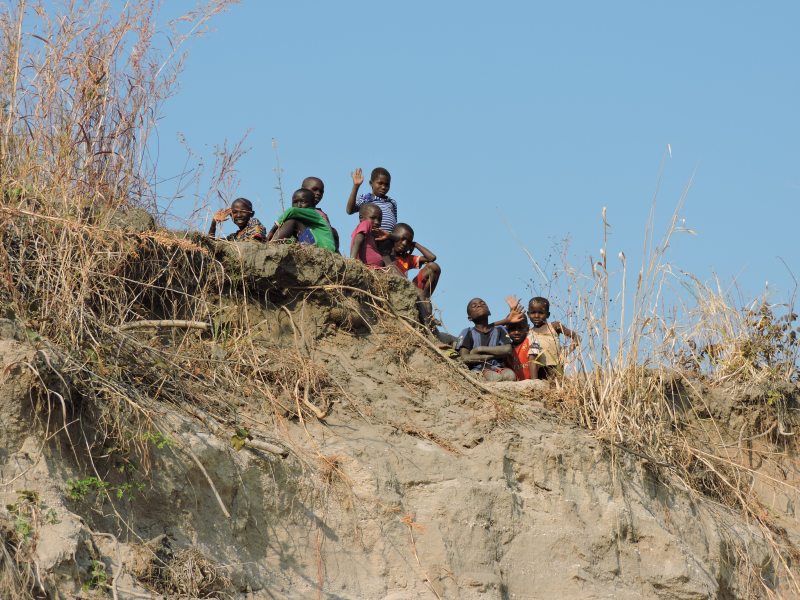 He descends the slippery cliff face gracefully, in mismatching sandals.

Alfred Muymwanzi was a cook for Desmond Clark and crew back in the 1960s.  Clark had a dedicated baker according to Alfred – fresh bread daily.  And always milk in his tea.  Ah, a simple pleasure which for me borders on a necessity (cartons of long-life milk stored in my suitcase).

Alfred Muymwanzi and me, Larry Barham

Through an interpreter, we move the conversation to current research.  Turns out Alfred makes hafted adzes and has a friend who’s an expert at crafting handles.  PhD student Chris Scott gets involved and we show Alfred an Early Stone Age handaxe picked from the surface of the site. Could he make some handles for such stone tools? Yes, and promises to return with his expert friend. 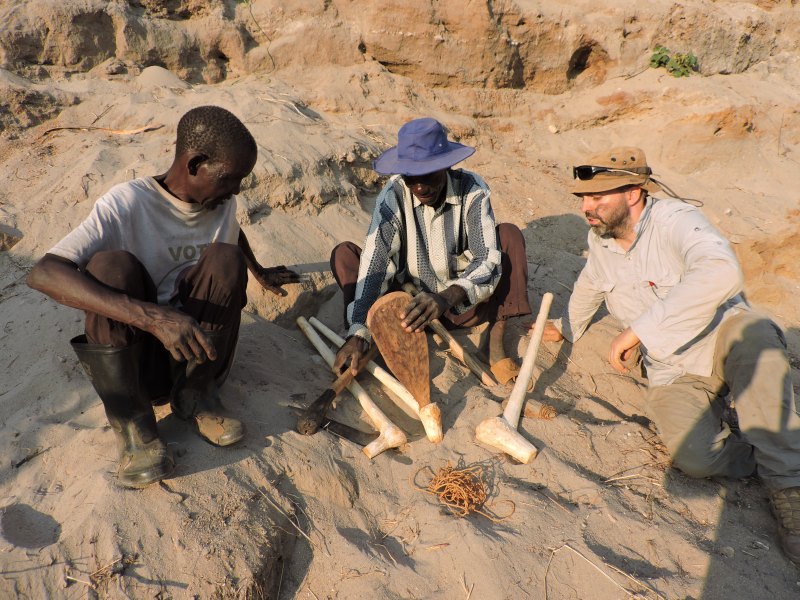 Chris Scott, Alfred and his friend (sorry, we did not get his name)

The project moves on with its mix of the archaeological and ethnographic – in Zambia they’re inseparable and rightly so.  The present is a starting point for understanding the past.

A day or two later, five young volunteers for UNESCO turn up out-of-the blue.  They’re here to help gather data for putting Kalambo Falls on the map of World Heritage sites.  A godsend.  I’ve been pushing for years to get this site listed and suddenly there’s action.  After a phone call to those who granted our permit, it turns out that no one really knows who organised this party of angels.  A coincidence?

We’ve been jumping through the hoops set by Mbwilo.

That afternoon, after they leave, an unexpected find emerges from the dense black clay just above the river.  We can’t share details yet as there’s much work to do in the lab.  But it would please Desmond greatly.

Is this find a result of Chief Zombe’s blessing? Or Mbwilo’s reward for perseverance?  Whatever the source, we’ll gladly take our luck as and when it comes.