They say you shouldn’t go food shopping when you’re hungry because you buy impulsively. I’m now a firm believer in that piece of wisdom.

More than two weeks after returning from Zambia, I’m still recovering from acute food poisoning that struck during the final few days of the project.  The culprit, I think, was a spinach-like vegetable called bondwe that I bought from the local supermarket at the end of a long day’s work.  I was hungry and there was one cooked portion remaining, wrapped in plastic under a hot light.  I asked for it with rice and beans – a veggie feast in the making after several days of too much meat.

Afterwards, I remembered that the bondwe packet was puffy like a marshmallow.  Alarm bells should have rung in my head – DO NOT EAT THIS! – but hunger took over and by early in next morning I knew something was wrong.  I awoke with a splitting headache, shivers, aches, stomach pains and an intolerance of light.  And the final day of excavation lay ahead.  Groan.

At this point I wasn’t sure if I had the beginnings of malaria, tick bite fever (I found a tick on my neck), food poisoning or some vengeful combination of the three.  Five days later, facing 21 hours of travel home, my universe was still narrowly focused on the nearest toilet.

Food poisoning was diagnosed later and I’m grateful to our doctor who prescribed a strong course of antimicrobials – they worked, and I’m in a heightened state of hygiene awareness.  Long may it last.

I’d prefer to forget those last few days in Livingstone after an exciting season of discoveries, but the experience is part of the reality of fieldwork that needs sharing.  That reality includes the dull necessity of organising permits and arranging the export of artefacts for analysis.  Tedious at the best of times, but a trial with your body in revolt.

My memory of the final day on site is a blur – details lost in the concentration of managing the team as they recorded and removed artefacts plus trying not to embarrass myself in front of them, or the wildlife. But I managed to capture a little of the essence of that morning in this short video taken at the sand scarp site and featuring Sangoan* artefacts:

*Flakes, cores, points from the beginning of the Middle Stone Age

As the morning wore on I knew I wouldn’t last the day and as soon as this one site was recorded we packed up and left for the comfort of modern plumbing back in Livingstone.  That was Thursday.

Race against time over bureaucratic hurdles

The following four days were torture as I had to arrange export permits for the artefacts and dating samples, organise the freight delivery, get wooden crates made and deal with a visa issue that arose unexpectedly on the Friday. A public holiday was looming on the Monday, the day before the return flight. Officialdom would be shut.

The Woodpecker Workshop where the wooden crates were made for shipping the artefacts and dating samples. They’re brilliant!

Time was short and all I wanted to do was sleep.  Fortunately, getting the export permit was easy this time, thanks to my helpful colleagues at National Heritage and the Livingstone Museum.  I provided a list of every artefact to be removed for analysis, which would be returned next year.

Geoff Duller, our luminescence dating specialist (see previous post) had left his many samples of sand and cobbles for me to arrange export along with the artefacts.  These had to be treated carefully, especially those sealed in heavy black plastic or in plastic tubes as they would be ruined if opened at customs.   Geoff included a letter warning against exposing the samples to light or a particular kind of radiation.

But what if the letter had the opposite effect and customs became curious?

To minimise the risk, I put the dating samples in the same brightly coloured chitenge bags used for the artefacts so they wouldn’t attract attention.  It worked as they and the artefacts all arrived in Liverpool, intact. 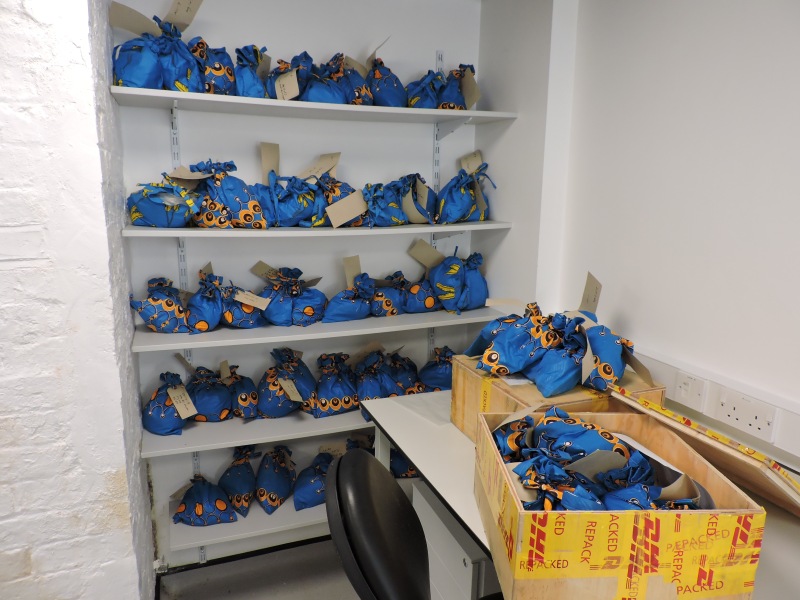 Before that happy ending, two more hurdles had to be crossed.

The tricky part came in getting the air freight company to agree to take stone tools and sand samples – this was a first for them.

The request for clearance went to the top person in the company in Zambia and then to South Africa.  Surely, they repeated, permission must come from the ministry of mines because these stone might be precious?  [Zambia is known for its gem grade amethyst, tourmaline and other minerals.]

In the end, I emptied several bags of artefacts onto a table – red sand staining the white melamine surface – and took photos to send to the big bosses.

More conversations followed and I demonstrated to the staff how tools are made by hitting stone on stone.  They agreed that the stone didn’t look precious and eventually the bosses relented.

That was Tuesday morning, two hours before my flight was due to leave. Cutting it close, I know, but on Saturday there was no one of sufficient seniority at the freight company who could complete the transaction  – and on Monday it was closed.

I rushed backed to my room (and toilet) leaving just enough time to finish packing and paying final bills.  Ken and Maggie kindly took me to the airport and loaded my bags onto a trolley – they could see I was unable to lift them.

And so the season limped to a bittersweet end.

I headed slowly to the security checkpoint hoping for a quick clearance and time to rest before getting on the plane.  Customs and security had other plans: hurdle number two.

They looked at my export permit and the few artefacts I was carrying. Not everything was sent by air freight, the most delicate tools were with me as specified on the permit.

The tools in their cheerful bags were taken away along with the permit and my passport.  At this point barely controlled panic set in.

A long 30 minutes later a request was made for another permit – from the ministry of mines! These were stones, and probably precious.  Being precious, they would also have to be taxed and someone from the revenue authority was summoned.

The flight was boarding.

The unforeseen benefits of ‘impact’

Forty-five minutes later I was cleared to travel and hurried through check-in.  In that anxious time, I presented to the assembled officers a potted history of the local Stone Age, showed how tools were made (much shaking of heads), mentioned Desmond Clark (blank looks) and then flashed the trump card of ‘the ancestors of bushmen made these tools’ (much laughter).

In desperation, I mentioned that the project was being filmed by the Zambia National Broadcasting Corporation and dropped the name of the journalist fronting the programme.  That was the breakthrough – they all recognised his name.  I added that the material would come back to the Livingstone Museum and would one day be displayed.

“Ah, this is good for the nation,” said one of the security men. They were hooked.

When could they see them in the museum and when would ZNBC air the documentary?  I explained that we had more work to do around Victoria Falls next year before the filming could be completed and the artefacts put on display.  They wished me well and looked forward to seeing me back in Livingstone.

I hope they remember my face and those brightly coloured bags of artefacts.

Patience is a virtue and not just when shopping on an empty stomach.  As academics we are expected to engage with the public to explain what we do with the tax payer’s hard-earned money.   It’s called impact, and it makes the job even more satisfying.

I want to share the excitement of pure research – that’s what this series of blog posts is about.  But there is a practical side too as I found out at Livingstone airport, to having an informed public.

Especially when they are in positions of power…

4 thoughts on “The good, the bad and the bondwe”