That was a question posed by the interviewer for Zambia National Broadcasting Corporation which is  producing a documentary about this project – and the first filming was done, in a pit, on the Maramba River.

The river is a small tributary of the Zambezi and its dark green water looks enticing but there are crocs (‘plenty’ says the local farmer) and downstream elephants browse its banks. 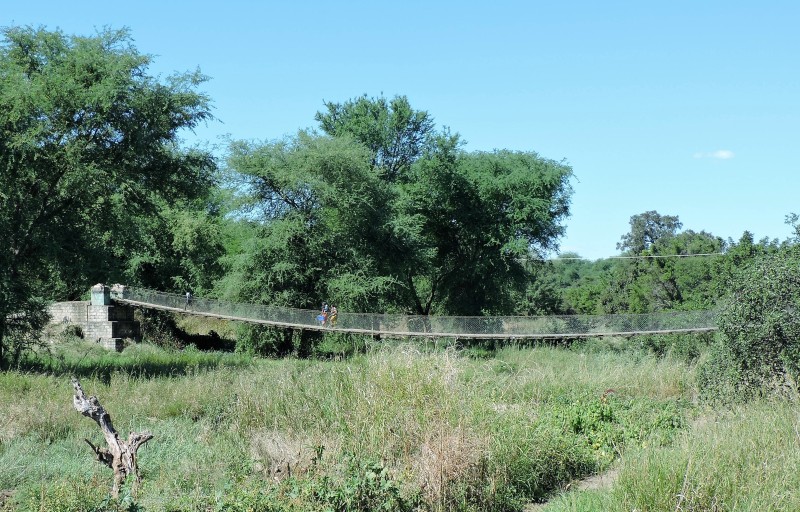 We started the project here for two reasons, one research based and the other practical.

In 1938, archaeologist Desmond Clark and geologist Frank Dixey mapped and excavated a series of sites around Victoria Falls.  Desmond found an archaeological sequence in an old terrace of the Maramba about 4.5m above the modern river. Here he found very early Middle Stone Age artefacts in fresh condition overlying artefacts of the late Acheulean (the end of the Early Stone Age).  And that’s just what we want to study – that transition from the Early to Middle Stone Age.  The terminology is messy, with the addition of ‘early’ to the Middle and ‘late’ to the Early Stone Age, but that is our problem. Archaeologists don’t have nice neat labels for this transition.

Desmond described finding handaxes of the late Acheulean of ‘exquisite workmanship’ along the Maramba.  This had to be our starting place.

And now the practical side.

Digging gravels is aching work, with pick and shovel, becoming worse as the pit deepens.  Keeping the walls straight and corners neat becomes more difficult and the routine of sieving every bucket of sediment becomes more tiresome as the buckets have to be lifted out manually and carried to the sieve.  The amount in each bucket needs to be reduced to lighten the load the further we go down,  so the whole process of excavation takes longer.

Maggie and Elise are doing one of the most important jobs as the pit is dug, drawing the ‘section’ wall so each change in the nature of the ground, each ‘stratum’ we have dug, is recorded and measured so we have its stratigraphy logged

There is also a real safety concern as beyond 1.3m there’s the risk of walls collapsing and someone being buried alive.  Once that depth is reached we’d have to move on or shore up the walls, and in the case of the Maramba Desmond reported depths of up to 3m of gravels.  For this reason, the first pit was placed at the highest point on the terrace and if needed we could step down in a series of trenches to sample safely the full sequence.

It would take time to get through this rough deposit, especially with a novice crew, unfamiliar with stone tools and excavation methods.  Inevitably there are lots of interruptions, with basic questions of methods and identification of objects (‘is this a flake?’).

But I knew that in terms of morale it helps to save the best for last, like a really good pudding at the end of a long meal.  The gravels would be the meat and potatoes.  The meringue and ice cream would come later in the Mosi oa Tunya National Park, where the digging would be in sand and the artefacts as fresh as the day they were made (well, almost).

And so we began, after getting permission from the landowner, by clearing a 2m x 3m space atop a maize field overgrown with prickly weeds (I posted before and after pictures in the last episode) .  The site was labelled MC1 after the locality, ‘Messenger Compound,’ referring to its former colonial role.

Each artefact was later labelled (after washing – my job) with the site prefix and excavation level number.

We sieved the surface sediment and as expected it contained a mix of modern stuff (glass, brick and bits of tile) but also stone artefacts in the form of flakes – a promising start.  In the next level, up popped a key artefact of that awkwardly labelled phase, the early Middle Stone Age. The tool, called a ‘core-axe’ with its distinctive rounded tip had me doing a little dance (I have a growing repertoire of stone artefact dances, embarrassingly true).

We were in the right place at last. 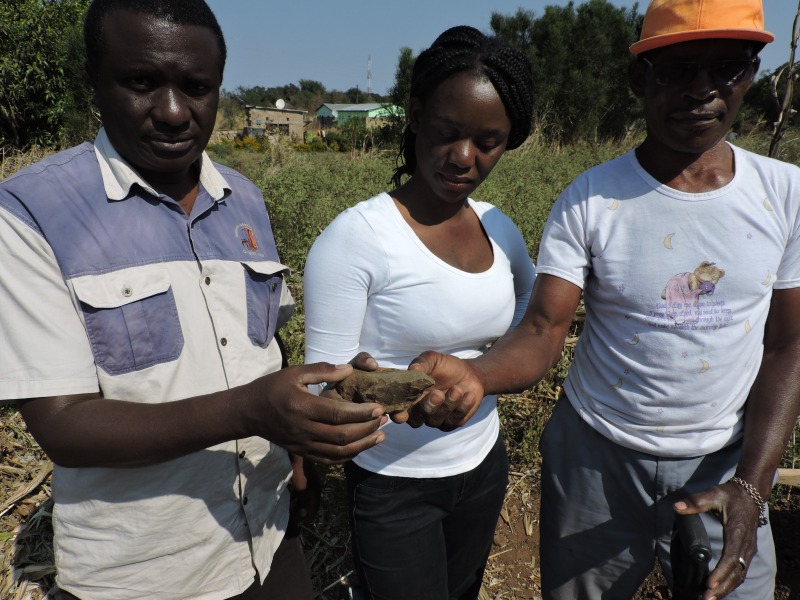 The core-axe was an important find and the excavators wanted to share the prize! Here are Ken, Maggie from the Livingstone Museum and Uncle Tom (who was a local volunteer – we were were grateful to add him to the team while we were at this location)